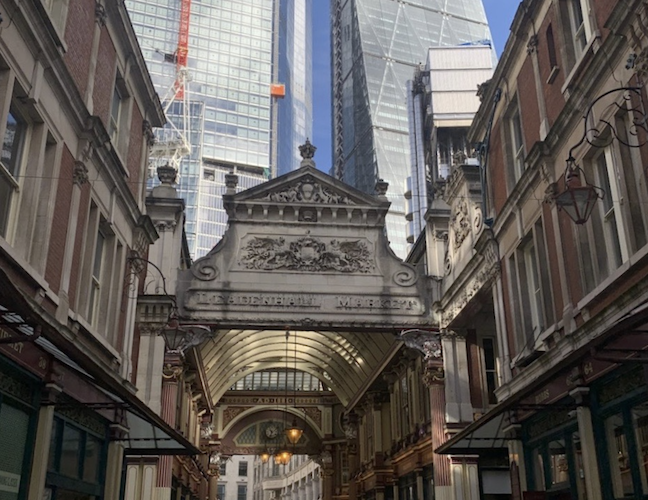 Vic Keegan: The Roman Foundation of Leadenhall Market – in a Barber’s Basement

If photographs could talk, the one at the top of this article would tell a story of 2,000 years or more of a historic part of London. The skyscrapers that oil the wheels of London’s prosperity today stand behind the magnificent Leadenhall Market.

The market’s current form was designed in 1881 by Sir Horace Jones, who also gave the capital many other buildings, including the original Billingsgate Market and Tower Bridge. But a market has existed on this site in one form or another since at least the 14th century, when it was owned by the town dignitary, Sir Hugh Neville.

In 1411 it was acquired by the City of London Corporation with the help of a certain Richard Whittington. From Walter Thornbury’s 1878 Old and New London, Volume 2reproduced on British History Online, when Don Pedro de Ronquillo, the Spanish Ambassador, visited Leadenhall in the 1600s, he told Charles II that he believed there was more meat sold there than in all the Kingdom of Spain in an entire year.

Taking up much of the land between Gracechurch Street and Leadenhall Street, the market was once so large that in the 1720s part of its land housed the headquarters of the East India Company, the largest corporation in the world, as shown the map below.

And the age of today’s market buildings pales in comparison to that of a piece of masonry found by archaeologists in the 1880s when Leadenhall was rebuilt to Jones’ plan. Today, believe it or not, it is located in the basement of a barbershop where the market meets Gracechurch Street. The staff were incredibly friendly when I dropped by unannounced to have a look. It is down two flights of stairs and protected by a glass partition. 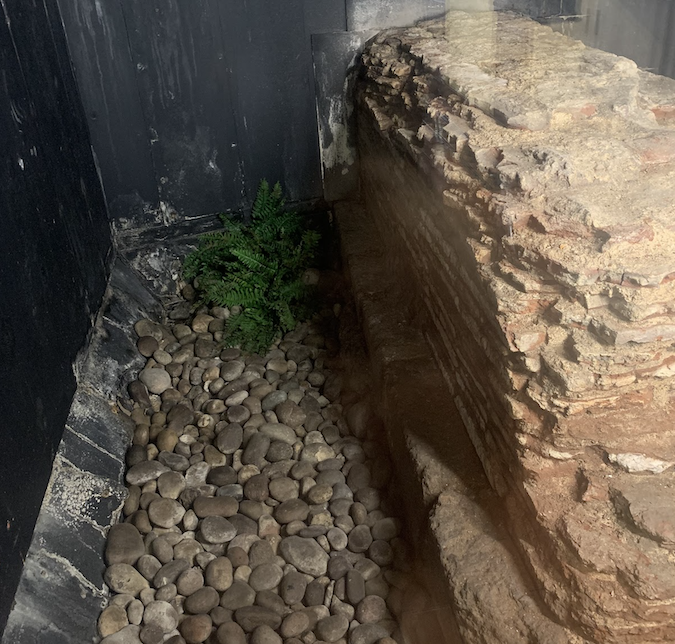 This unique artifact is the base of an arch that was part of a basilica – a courthouse or assembly hall – dating back to AD 70. The basilica was the largest Roman building south of the Alps and the center of Roman London, from where most routes to the rest of the country originated. It is said to have been as high as St Paul.

It was built on a five-acre site where the foundations of many halls were discovered and recorded by archaeologists before being buried forever under new construction. It stood alongside a forum – a marketplace and public space where citizens could meet and exchange ideas. Although much larger, the forum was reminiscent of Leadenhall today – a place where merchants, residents and visitors trade and party.

The basilica and forum stood for over 200 years until they were destroyed, not by an alien force but by Rome itself as punishment for London supporting the rule of “rogue emperor” Carausius.

In the medieval period that followed, Leadenhall was London’s most important market, particularly for meat and poultry, but also for butter, cheese, wool and cutlery. Like now, it would have been a hive of noisy activity, though much smellier.

Today you still get a sense of the Middle Ages when you step out of the narrow lanes into the magnificence of Jones Market. It’s easy to see why he’s found his way into films, including Harry Potter and the Philosopher’s Stone.

Leadenhall invites comparison with the even older market at Borough across the Thames, which began at least as early as 1014. It has more carved charm than Borough, but relies heavily on traveling town workers . This guarantees plenty of spending during the week, but Leadenhall almost falls asleep on the weekends.

This is a problem but also an opportunity. The City Corporation and EC BID seek to attract more domestic and foreign visitors. The infrastructure is already there and a huge reservoir of history remains to be fully exploited – from its Roman foundations to.

This is the sixth article in a series of 20 by Vic Keegan on places of historic interest in the Eastern City part of the City of London, kindly supported by the EC BID, which serves this area. London’s policy on ‘supported content’ can be read here.